Spent this weekend unsubscribing from a bunch of emails I had been getting. Feels good. Kind of like pruning.

As a New Years resolution, I want to focus on unsubscribing from a lot of things — both online and offline — that clutter up my life and distract me from what is truly important. There’s junk email, certainly, then TV, then junk food. But I also want to unsubscribe from negative and petty thoughts and negative and petty people. It’s easy to wallow in irksomeness, but how valuable is that? Not much. Just junk emotions.

Sometimes, to be who you want to be, you have to pare back.

What should you unsubscribe from?

And having done that, what have you discovered about yourself that you subscribe to? 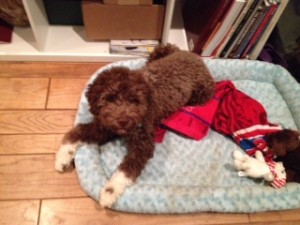 This is my puppy, Juno. She is learning a new command, “Go to bed”. If she goes to her bed and lies down, she gets a treat. It works, but she has a short attention span; if I don’t continually give her treats while she is in bed, she’ll get up and move on. Some times, she get’s up because she knows I will tell her to “Go to Bed” and she will get a treat.  Sometimes she goes to bed without me saying anything, and looks at me, expecting a treat.

The goal is for her to go to bed at the phrase “Go to Bed” without any treats and to stay there.  We have a ways to go.

Sometimes we do the same thing when we market products.  We focus on the incentive to draw them in and then presume that they will buy what we have.  This is an age old method (should I say trick?) and incentives have worked.

But there are two problems with incentives.  One is that the quality of your customer is not the same as someone who responded to your ad or offer of the product itself;  individuals who are drawn to you via incentives may just as easily be drawn away from you to some other bigger incentive.  And certainly, they don’t have the same emotional attachment to the product which will make them less likely to buy from you or recommend you to someone else (unless they like incentives, too).

The other problem is that consumers are not responding to offers as they used to.  They are more often searching online and what they are looking for are not gimmicks, but products.  And the products they will choose will be those that have (for the most part) been validated by others.

So, if you want to incent people to buy your product, invest in the product itself.  Make sure it has value and get the buyers to comment on the product so that it creates a sense of trust that what you say you are offering actually exists.

In other words, if you want people to “Go to Bed” don’t focus on the treats;  build a better bed.

I’ve spent the past two weekends removing wallpaper from our living room. The living room is one of two remaining rooms with wallpaper and this process is part of my new year’s resolution to be more proactive around the house.  Of course, I wasn’t as proactive as I could have been.  I casually mentioned that I needed to get to the wallpaper in the living room, and it was my daughter who spotted a peeling section in one corner and asked if she could tear it off that got the whole thing going.

So, the best way to remove wallpaper is to realize it is going to take some time, put on some of your favorite music and have a little patience.  All the while, try not to think about all the varieties of torture you’d like to inflict on the individuals who put the wallpaper up in the first place.  Instead, think about how nice the room will look when it’s all done and painted.

For three days over two weeks, I’ve fired up the stereo, cranked up the steamer and went at it, steamin’ and peelin’ to Eric Clapton, Elmore James, Magic Sam and a little Dead, Decemberists and Arcade Fire for variety.  And, if you just realize that the only thing between you and a completed room is a little time, you can make it through.

The hardest part of change is not creating new habits; it’s removing the old ones first.  Those old habits have become, in a sense, hardened wallpaper, impervious to penetration.  They can only be removed with concentrated effort and persistence.  Because, habits, like wallpaper, have become fixtures in our mental rooms.  They are how we see the world and how we react to it.  Some of that mental wallpaper was put up a long time ago; others we have learned recently.  Often, we forget that it is only wallpaper, we think it’s part of the structure itself and that if we tear it down, the whole house will crash in.

The real limitations to becoming the person we want to be or the company we want to be a part of, is not as much the lack of talent, time or resources as it is our ability to change our mental models of the world; indeed, our mental models of ourself.  If we take the time, and have patience with ourselves, our ability to strip down the wallpaper can either reveal something new and wonderful or reveal something which is crumbling and needs to be fixed; either way, you will be able to see yourself if a new and honest light.

Proving for the peeling sections of your mental wallpaper can take either self-contained introspection or, like me, the assistance of someone (your daughter? your spouse? your friend?) helping you identify those blind spots with you. Be open to the possibility that what you think is rock solid is only paper thin and with a little effort, patience and, perhaps some Chicago blues, can be torn away.

That’s something to sing about.

I was on a flight yesterday from San Antonio to Charlotte.  A woman sat next to me and ahead of us were, it seemed, her parents. As we were taking off, the woman pulled out a pack of gum, offered a stick to each of her parents and turned and offered me one.

It was, as the cliche goes, a random act of kindness, without strings. And it made me think, that’s what a stick of gum is for.  To share.  When people pull out a pack of gum, it triggers some primitive urge to reach out to someone.  The gum doesn’t cost much and the act of sharing doesn’t come saddled with commitments. Yet the small gesture makes both parties grateful, a small ritual of acceptance and recognition that we are human and somehow connected. And it’s all wrapped in minty freshness.

What if we consciously turned every interaction we made into that ritual?  If every time we met someone, or spoke to them on the phone, or sent something in the mail or posted something on the web for them to see, we made them feel like we had offered them a stick of gum, that we said, “I know you”, “I’m just like you” and “You are special.”

I barely spoke to the woman on the plane.  I will never see her again.  Yet, for that one small moment, we shared something and it made me feel good and I won’t long forget it.

I think I’ll carry a pack of gum with me, from now on.